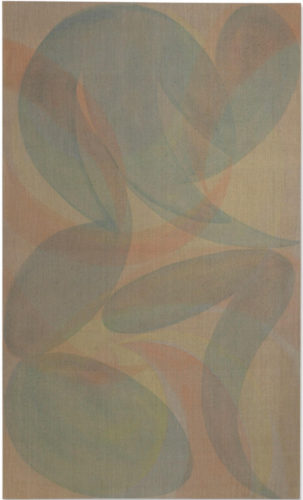 Yelena Popova explores the type of non-Euclidean geometry pioneered by Nikolai Lobachevsky in the early nineteenth century. She also attempts to deflate painting’s overstated status, presenting it as a prop or ghostly image breaking free from conventions of display and the constraints of the frame. Popova makes paintings, but also works with installation and video, her films and videos providing a wider context and detailed elaboration of the questions she brings to the medium of painting. Balance of Probabilities (2012), for instance, offers a configuration of Constructivist gestures where painting is supported with the aid of deconstructed pallets, studio furniture and even a strategically placed doorknob.

Popova’s most developed series of paintings to date are also her apparently least worked. In the Invisible Paintings (2014-ongoing), she embarks on an extended examination of the visibility of that which is largely invisible: labor and its value, not to mention the use, exchange and surplus value that labor creates. Akin to the resistance to the industrial, corporate and capitalist treatments of the stuff we eat through the sow food movement, Popova mixes her own pigments and eschews artists’ supply shops. “Read-made paint is as evil as ready-made food,” she says with a peasant’s cunning. Her Invisible Paintings and method of labor are something of a slow antidote to the speed and overload of a digital culture and economy predicated on the image.

Exhibited
London, Saatchi Gallery, Gaiety is the Most Outstanding Feature of the Soviet Union: New Art from Russia, 2013 (illustrated in colour, unpaged).