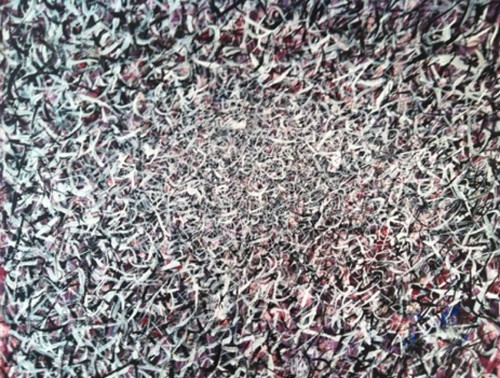 Was an Italian painter. After spending his childhood in Belluno (where he attended high school at the Collegio dei Salesiani), in 1943 he interrupted his classical studies to enroll at the artistic high school in Venice, which he completed two years later. In 1946 he enrolled at the Academy of Fine Arts in Venice to follow the courses of the Free School of the nude held by Armando Pizzinato. In this period he met and made friends with Emilio Vedova. At the end of 1947 the painter went to Paris where he met the European avant-gardes of the first half of the century. Between 1948 and 1949 he lives and works between Feltre and Venice he knows and, in May 1949, he held his first solo exhibition at the Galleria Sandri with a presentation by Virgilio Guidi. In 1950 he stayed in Rome, where he joined the Age d’Or group, which organizes exhibitions and editions of the international avant-garde. The following year he took part in the 1st International Abstract Art Exhibition at the National Gallery of Modern and Contemporary Art in Rome. Shortly thereafter, he returned to Venice, where he met Peggy Guggenheim, who gave him a study and bought his works. In 1952, again in Venice, he was awarded the Graziano Prize for painting; still in the same year together with other artists he signed the manifesto of Spatialism, a movement founded in Milan around 1947 by Lucio Fontana. Between 1958 and the end of 1959 he shared a studio at Palazzo Carminati, home of the Bevilaqua la Masa Foundation, with his friend, Davide Orler. This period is documented by several canvases painted on the recto from one to the other (see the Dalai Emiliani General Catalog, page 164). He exhibited in 1952 at the Galleria del Cavallino in Venice. In 1953 he was also present at the Galleria del Naviglio in Milan with a presentation by Peggy Guggenheim and Virgilio Guidi; he is also invited to the Italy-France exhibition in Turin, where he exhibits in the hall next to Hans Hartung. In 1954 he took part in Tendances Actuelles with Pockock, Wols, Mathieu at the Kunsthalle Bern.

1955 begins with the final separation from Peggy Guggenheim and ends with the departure for Paris, where he exhibited in a collective exhibition at the Galerie Stadler. In Paris he meets Dubuffet, Asger Jorn, Karel Appel. In the following years he exhibited at the Saidenberg Gallery in New York, at the Hanover Gallery in London, at the Selecta Gallery in Rome and participated in the Carniege International in Pittsburgh. In 1958 he married the Norwegian painter Tove Dietrichson. In 1959 he exhibited at the Galleria dell’Ariete, returns to Paris where his daughter Elisabetta was born in December. In the spring of 1960 he returned to Milan where he regularly collaborated with the Galleria dell’Ariete. In this year he travels to Norway and exhibits at the Anti-Procès exhibition at the Galleria del Canale in Venice. In 1962, after a trip to Sweden, he exhibited at the Venetian Gallery of the Canal and at the Galleria Levi in ​​Milan, also receiving the Marzotto Prize at Valdagno. At the end of the year he had a nervous breakdown and was admitted to Villa Tigli in Monza with a diagnosis of paranoid schizophrenia. He stayed briefly in Rome in 1963 and shortly after the birth of his son Alessandro, he returned to Venice from his sister. Here he has a new hospitalization, he exhibits again in 1964 at the Venice Biennale and after a short trip to Sweden with his wife, he returns to Rome again from his brother. Here, at dawn on 27 September, he takes his own life by throwing himself into the Tiber.