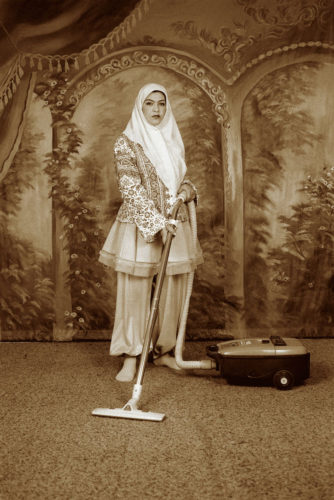 Untitled (From the Qajar Series)

The photographer Shadi Ghadirian has spent her career challenging the social norms of her native Iran, especially with regard to gender. This large untitled portrait, which was exhibited at the 2009 Saatchi Group exhibition “Unveiled: New Art from the Middle East”, is a full and immediate example of the arrest of his practice. It depicts a woman who looks confidentially at the camera. With its sepia, the bucolic painted background and the old-fashioned costume of the Qajar era, it could be mistaken for a 19th-century photograph if it were not for the presence of a contemporary vacuum cleaner, brandished by the woman as a weapon. Ghadirian directly visualizes the domestic and restrictive role accorded to women in Iran and the social tension between the history and modernity of the country. “The conflict between
old and new, “says Ghadirian,” is the way the younger generation currently lives in Iran: we can embrace modernity, but we are still in love with the traditions of our country. “Ghadirian’s work, presented in 2012 The exhibition” Lights from the Middle East “of the Victoria and Albert Museum, was collected by the V & A, the British Museum, the Smithsonian and the Center Pompidou, among others.