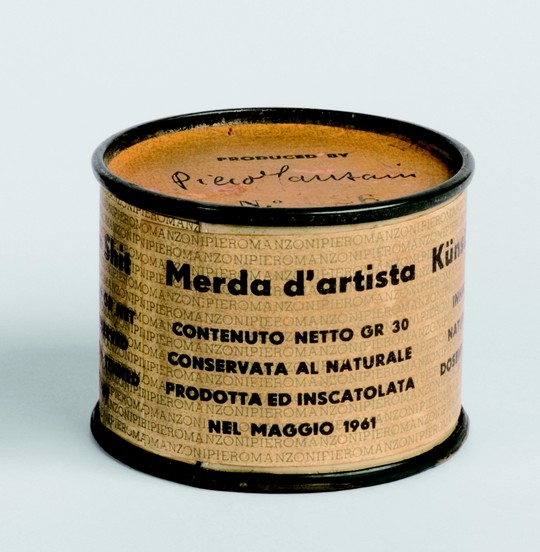 Piero Manzoni was born on 13 July 1933 in Soncino (a village in the Po Valley in the province of Cremona). He grew up in Milan, spending his summer holidays at Albisola Capo (a seaside resort on the Liguria Riviera), where he and his parents used to meet Lucio Fontana, the founder of the Spatialism avant-garde movement.Piero Manzoni made his debut in 1956 at the “Fiera Mercato” in the Castello Sforzesco of Soncino. The next year he took part in the exposition “Movimento Arte Nucleare” at the Galleria San Fedele, Milan. At that time his works were anthropomorphic silhouettes and canvases bearing the imprints of ordinary everyday objects.
In 1957 he painted the first Achromes: completely white canvases covered with rough gesso and imbued with glue and liquid kaolin (white clay used in the production of porcelain).In 1958 Piero Manzoni exposed with Lucio Fontana, the founder of the Spatialism, and Enrico Baj, the founder of the Nuclear Art. In the same year he had begun the collaboration with two young artists, Enrico Castellani and Agostino Bonalumi. In 1959 they edited the first issue of “Azimuth”, an avant-garde magazine, and founded the art gallery Azimut (run by Castellani and Manzoni).Manzoni’s way of working became more and more and more radical. His mature works investigated the limitation and the possibilities of the painted surface: the Lines – single line drawings on paper, placed in sealed cardboard tubes, labelled and signed by the artist (the longest one had been executed on July 4, 1960, at Hernig, Denmark, on a 7,200-meters roll of newsprint); the Bodies of Air (“Corpi d’aria”) and the Artist’s breath (“Fiato d’artista”), pneumatic sculptures filled with Manzoni’s breath; the Sculpture Eggs, authenticated by the artist’s thumbprint; the Magic Bases, pedestals that transform people standing on them into works of art; new Achromes built up of several materials (cotton, glass fiber, bread rolls etc.), some mainly white, others in phosphorescent colours. On July 21, 1960, in Milan, Manzoni realized one of his more famous manifestations: the Consumption of dynamic art by the art-devouring public (“Consumazione dell’arte dinamica del pubblico divorare l’arte”). Manzoni marked with his thumbprint some hard-cooked eggs and offered them to the visitors, who were thus invited to “devour” art. In 1961, in Rome, Piero Manzoni certificated his first human beings with his signature in order to create Living Sculptures. In the same year he carried through his most shocking gesture: he offered for sale at the then-current price of gold, ninety cans of Artist’s Shit, each with a net weight of thirty grams.Piero Manzoni succumbed to a fatal infarction at the age of twenty-nine, in Milan, on 6 February 1963.