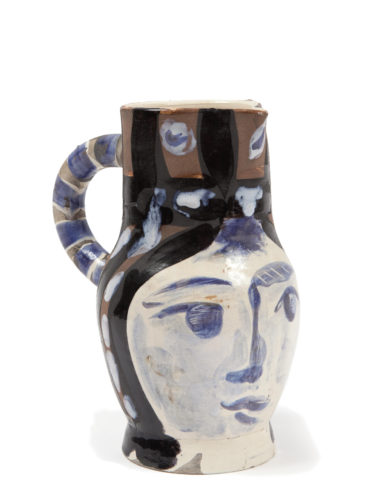 Pablo Ruiz Picasso (b. 1881, d. 1973) was born October 25, 1881 in Malaga, Spain and by the time he died in France in April of 1973, had created a staggering 22.000 works of art in a variety of mediums, including sculpture, ceramics, mosaics, stage design and graphic arts. As critic Hughes notes, “There was scarcely a 20th century movement that he didn’t inspire, contribute to or–in the case of Cubism, which, in one of art history’s great collaborations, he co-invented with Georges Braque–beget.” Quite simply, as well as being a force of culture, Picasso was also a force of nature.
A precocious draftsman, Picasso was admitted to the advanced classes at the Royal Academy of Art in Barcelona at 15. After 1900 he spent much time in Paris, remaining there from 1904 to 1947, when he moved to the South of France. His power is revealed in his very early works, some of which were influenced by Toulouse-Lautrec (such as Old Woman, 1901; Philadelphia Mus. of Art).
Picasso’s artistic production is usually described in terms of a series of overlapping periods. In his “Blue Period” 1901-4 he depicted the world of the poor. Predominantly in tones of blue, these melancholy paintings (such as The Old Guitarist, 1903; Art Inst. of Chicago) are among the most popular art works of the century. Canvases from Picasso’s “Rose Period” 1905-06 are characterized by a lighter palette and greater lyricism, with subject matter often drawn from circus life. Picasso’s Parisian studio attracted the major figures of the avant-garde at this time, includingMatisse, Braque, Apollinaire, and Gertrude Stein. He had already produced numerous engravings of great power and began his work in sculpture during these years.
In 1907 Picasso painted Les Demoiselles d’Avignon (Mus. of Modern Art, New York City), a radical departure from the artistic ideas of the preceding ages and now considered the most significant work in the development toward cubism and modern abstraction (see modern art). The influence of Cézanne and of African sculpture is apparent in its fragmented forms and unprecedented distortions. The painting heralded the first phase of cubism, called analytic cubism. This severe, intellectual style was conceived and developed by Picasso, Braque, and Gris c.1909-12. Picasso’s Female Nude (1910-11; Philadelphia Mus. of Art) is a representative painting and his Woman’s Head (1909; Mus. of Modern Art, New York City) a representative sculpture of this style.
In the synthetic phase of cubism (after 1912) his forms became larger and more representational, and flat, bright decorative patterns replaced the earlier, more austere compositions. The Three Musicians (1921; Mus. of Modern Art, New York City) exemplifies this style. Picasso’s cubist works established firmly that the work of art may exist as a significant object beyond any attempt to represent reality. During both periods of cubism experiments by Picasso and others resulted in several new techniques, including collage and papier collé.
Picasso’s enormous energy and fecundity was manifested by another development. In the 1920s he drew heavily on classical themes and produced magnificent monumental nudes and monsters that were reminiscent of antiquity and rendered with a certain anguished irony. These works appeared simultaneously with synthetic cubist paintings. Picasso was for a time saluted as a forerunner of Surrealism, but his intellectual approach was basically antithetical to the irrational aesthetic of the Surrealist painters.
The artist sought to strengthen the emotional impact of his work and became preoccupied with the delineation of agony. In 1937 the bombing of the Spanish town of Guernica impelled him to produce his second landmark painting, Guernica (Queen Sophia Center of Art, Madrid), an impassioned allegorical condemnation of fascism and war. Long held by the Museum of Modern Art in New York City, the work was transferred to Spain’s Prado in 1981, and was moved to the Queen Sofia Center of Art, Madrid, in 1992. The profits Picasso earned from a series of etchings and prints on the Guernica theme made in the 1930s went to help the Republican cause.
In his later years Picasso turned to creations of fantasy and comic invention. He worked consistently in sculpture, ceramics, and in the graphic arts, producing thousands of superb drawings, illustrations, and stage designs. With unabated vigor he painted brilliant variations on the works of other masters, including Delacroix and Velazquez, and continued to explore new aspects of his personal vision until his death. His notable later works include Rape of the Sabines (1963; Picasso Mus., Paris) and Young Bather with Sand Shovel (1971; private collection, France). By virtue of his vast energies and overwhelming power of invention Picasso remains outstanding among the masters of the ages.