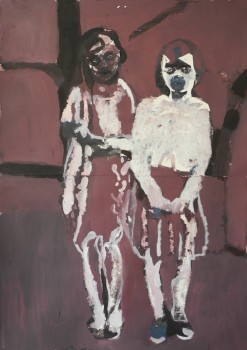 Nebojša Despotović was born in Belgrade in Serbia in 1982, and now lives and works in Berlin. In 2006 he obtained a degree in painting at the Academy of Fine Arts in Venice. In 2011 he won the residence at the Italian Bevilacqua La Masa Foundation. In 2012 he won numerous prizes including the Euromobil Under 30 Award at ArteFiera in Bologna and the Mango Young Artist Award at Swab Fair in Barcelona. In the following year he won the Collectors for Celeste Award for Raw Zone and in 2015 won the Special Prize-Art Prize at ArteFiera Bologna. The art of Nebojša Despotović is particular and complex: it draws heavily from the collective and personal iconographic patrimony, recovering old photographs and images, clippings from newspapers, books, manuals and magazines, from which the artist starts to build his own pictorial works. Despotović’s research, starting from the concept of identity, subtracts only apparently images from oblivion of time: covered and altered with painting, his works acquire an indefinite and inattentive character that leads them, in fact, to a remote time. In his portraits and paintings, characterized by dark colors and thick brushstrokes, the characteristics and details of the protagonists, as well as in his landscapes and scenarios, are barely mentioned. Attention is not focused on detail but rather evokes atmospheres that recall years, lives, stories and things that no longer exist and in which the viewer can perceive the distance and the loss of the past.