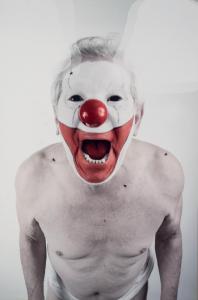 Matteo Basilé (1974) was born and lives in Rome. His career begins in the early ’90s as one of Europe’s first artists merging art and technology. Basilé owns the extraordinary capacity to conciliate opposing ideas such beauty and grotesque, natural and artificial. Exploring the nature of humankind, the artist develops his story in chapters: The Saints are Coming (2007), Thisoriented (2009), Thishumanity (2010), Landing (2012), UNSEEN (2014), PIETRA SANTA (2016): a series of independent transitions where Basilé negotiates his perception of existence. His research consists of an interface between East and West, an interjected dialectic operating as a collision between tradition and modernity, sacred and profane.
Basilé’s glossary is not just based on multicultural and timeless signs and values, instead it visually includes the global idiom where dream is no longer the main character of the photograph, as it incarnates a fully recognizable and unlimited narrative. His anti-eroes are a meticulous portraits that bring us back to classical history, but at the same time they transmit the spirit of the current time. Formally, Basilé deletes the antagonism between reality and imaginary, triggering a complex system of emotional sliding doors. Unlike “The Sleep of Reason Produces Monsters” by Goya, here dream and reason converge in an epiphany where unique and multiple convey into the perfect balance between intellect and sensorial perception. Basilé’s poetics is an iconographic universe, the result of a combination between technological mannerism and pictorial surrealism. The oneiric journey of the artist finally guide us towards several levels of comprehension, both sensorial and intellectual, where we suddenly become aware of those aspect of reality that usually hide within ourselves. Therefore, the thorough investigation of Oneself, of the Other and the Elsewhere finally correspond his personal life experience away from his origins, facing both the sense of existence and the context of those confused dynamics around the process of globalization.