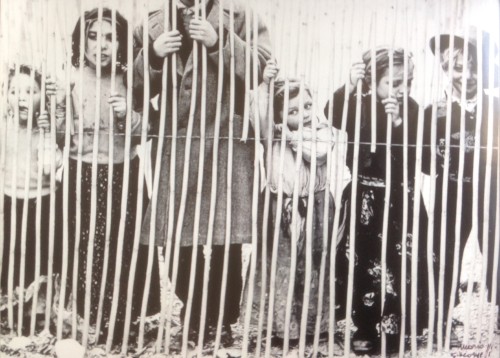 Mario Giacomelli was born in 1925 in Italy, in Senigallia, where he will spend his life and die in 2000. In 1934, his father dies and his mother takes a job as a laundress in a hospice for old people. He starts working in 1938 in a printing house and shows great interest for the typographic characters. During the war, the printing is destroyed but he builds it back, works there, and during his free time, paints abstract compositions (from which a certain materiality stands out). Also, he explores with great interest poetry and car racing. In 1952, a bad accident during a race convinces him to put an end to this passion. He buys his first camera and immediately feels a link between the object and his activity as a painter. He modifies his camera, creates a photography laboratory and chooses to use a contrasting paper since the beginning of his work.

His encounter with Giuseppe Cavalli allows him to enter a group of amateur photography: MISA, with a few personalities: Piergiorgio Branzi (Italian), Alfredo Camisa (Italian), Silvio Pellegrini (Spanish). He goes back to the hospice where he will photograph during three years (Hospice life), while studying at the same time landscapes and still life photography, as well as the use of chance. In 1955, he gets the first prize at the national exhibition Castelfranco Veneto. He says “the most beautiful pictures are the ones, maybe, that we don’t take, because if we had taken them, we would have spoiled something”. He makes (always by himself) short trips to Scanno, Peschici and Lourdes. In the early 60’s, he meets Luigi Crocenzi, in agreement with his will of narrative photography.

In 1963, John Szarkowski, director of the photography department at the museum of modern art of New York, buys his pictures of Scanno for the collection of the masters of international photography. One year later, he produces a new series of photographs devoted to the seasons and the land. During one year, he follows the life of a family of farmers (harvests, celebrations, crops, etc.). Then he goes back to the hospice and changes the title of his work: Death will come and have your eyes. He photographs cut tree trunks in a search for abstraction and produces a series of color photographs: The Landscape project, which links photography to poetry and abstract painting. From 1969 to 1980, he focuses specifically on lyrical abstraction and produces various series. He continues working on his lyric poems and on Dream (tale). In 1997 he decorates the Italian coffee cups of the Illy collection. His inspirations are, among others, Pablo Picasso, Paul Klee, Osvaldo Licini, Giorgio Morandi, Robert Rauschenberg and Barnett Newman.
He died in 2000.