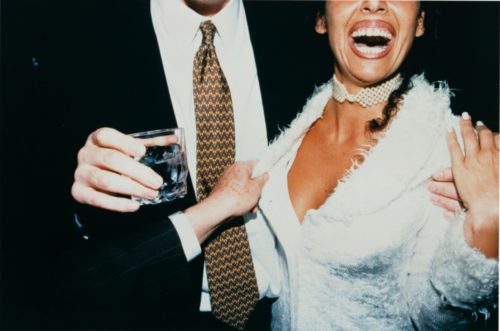 Favoring harsh realism over glitz and glamor, Jessica Craig-Martin subverts the tradition of the society photograph. Having worked for publications such as Vanity Fair and _W_, Martin is deeply entrenched in the world of high society parties. Her photographs begin as documents of these well-heeled events, but she crops out faces of partygoers, focusing on the minutiae they might rather remain unseen, such as sagging skin, wrinkle lines, or tans lines. Her detailed focus on blemishes and signifiers of wealth is coupled with high-contrast exposures that emphasize the superficiality of the glitterati in caustic color. Her work evokes the excess and abjection of Nan Goldin‘s photographs, styling the upper classes as absurd purveyors of artifice. “The camera is as cruel as the fashion and styling stunts it depicts are vain and ambitious,” wrote Glenn O’Brien of her work. “We see the socialite’s world as a House of Wax—a world so inhuman it attains the status of art.”