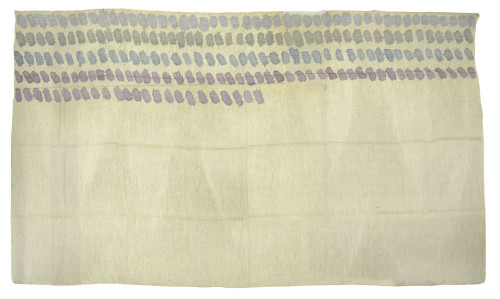 Giorgio Griffa was born in Turin in 1936 where he lives and works. He started painting a child and received the first lessons from traditional painters who at the time frequented the Circolo degli Artisti, an ancient Turin institution. A pioneer in Italian analytic painting, only in the mid-1960s Griffa’s figurative paintings began to appear abstract elements that enshrine the start of those reflections on the status of painting, on the tools of painting and on the artist’s position that will lead to the cycle of the “primary signs” with which the unmistakable imprint of his pictorial journey begins. It will be the pictures of the “primary signs” to place it among the protagonists of the debate of those years that develops on the ashes of the informal and unfolds through American pop-art and conceptual art. In those years he decided to change painting support and chose to work on rough canvases, on materials such as hemp, cotton and linen, highlighting the natural color under his oil painting, which has recently become acrylic. In 1969 he also decided to permanently abandon the frame, making the work free of all constraints and asking that it be simply nailed to the wall. The signs used by Griffa are recognizable, simple, result of his desire to use a language that can belong to everyone’s hand. His lines are vertical, horizontal or oblique lines, spots and spots that are constantly found in his research, never come to fill the canvas, as a result of the unstoppable flow of time and his desire for incompleteness of the work. Although it has been associated with movements such as Arte Povera, Analytical Painting or Minimalism, Giorgio Griffa’s artistic career remains, however, mostly solitary and not part of a specific current. He defines himself as “a simple painter and nothing more”. Since 1968 the artist has held more than 150 personal, and participated in a long series of group exhibitions, exhibiting in public and private spaces, both Italian and foreign. For many years he collaborated with the art dealer Gian Enzo Sperone and in 1970 he exhibited in Ileana Sonnabend’s galleries in New York and Paris.