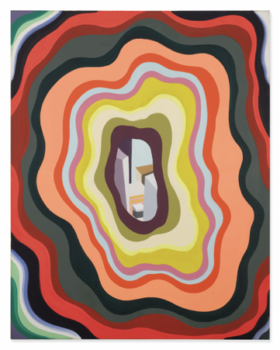 A restless traveler, Franz Ackermann sustains his artistic investigations through continuous voyages, particularly to large cities in Asia, America, and Europe. Ackermann is interested in the forms that structure urban organization, searching for the codes and symbols that shape public language in the contemporary world. During a period spent in Hong Kong, Ackermann focused on a series of small works on paper that he calls “mental maps,” and which he continues to make each time he encounters a new city. These renderings resemble a representation of nerve cells, in which innumerable linear conductors come together toward a vital center. The maps—not travel souvenirs, but rather personal systems of orientation—represent the more intimate and private side of the artist’s work. In contrast, his installations and paintings on canvas or on the wall are unquestionably public and sometimes monumental in size. Conscious of his privileged position as a traveler, the artist frequently uses his work to examine the dynamics of tourism. From terrorist attacks to the often problematic impact on the cultures he has visited, the artist exposes new conflicts that derive from the continuous movement of individuals and peoples and from the accelerated speed that characterizes contemporary modes of travel and communications.

Naherholungsgebiet (Public Park), 2000, is from the oil-on-canvas series Helicopters, aerial views of urban centers that look like motors radiating energy. The composition, within which various architectural structures are recognizable, is layered on different planes and seems to extend infinitely. Fields of psychedelic colors define details that, while specific, could belong to any urban center. The view of a possible center from which the action radiates outward is contradicted by the equal weight given to each part of the work, just like the contemporary geography of large metropolises, where no single place can be identified as a unique center, and where the periphery is continuous.

In contrast, an image of an energy vortex roams the surface of Unsafe Ground II, 2001. As if it were an urban center seen from a great distance, the nucleus that dominates the composition seems to attract and, at the same time, to liberate in space the fragments of architecture that traverse the surface of the painting. The work exposes the ambiguous dynamics that define many megalopolises, its title recalling official language used to warn that a given terrain is unsuitable for construction.

The idea of travel as a liberating intellectual experience, is instead explored in Map of the World, 2007. The installation repeats the exact shape and dimensions of a small garden shed that George Bernard Shaw used for writing in solitude without straying far from his house in the village of Ayot St. Lawrence, England. Nicknamed “London,” the shed allowed the writer to work undisturbed and to claim, without being able to be contradicted, that he was elsewhere. Just like Shaw’s shed, Ackermann’s installation is mounted on a pivot, so it can be rotated manually, to follow the path of the sun and to offer a changing view. Ackermann’s shed is further enriched by a dense grid of drawings on the inner walls, a manifestation of the many voyages the artist continually makes, even when he remains in one place.