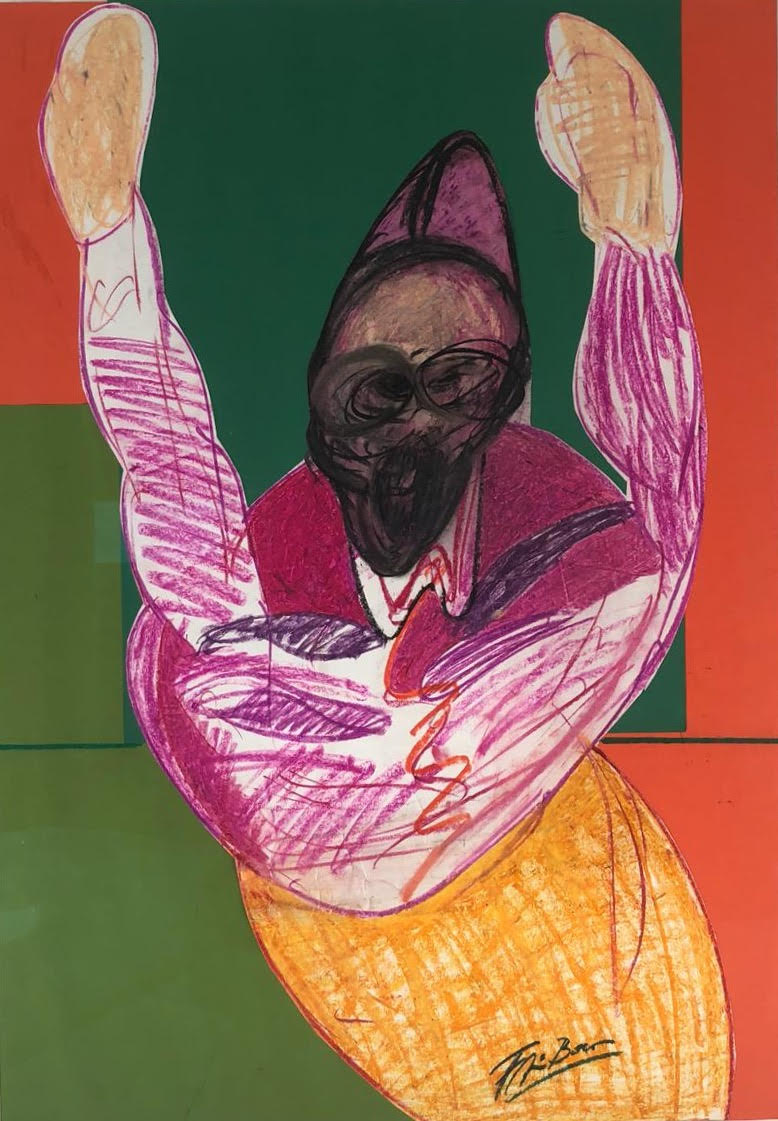 Born to an English family in Dublin on 28 October 1909, Francis Bacon was the second of five children of Christina Firth, a steel heiress, and Edward Bacon, a race-horse trainer and former army officer. His childhood, spent at Cannycourt, County Kildare, was blighted by asthma from which he suffered throughout his life. With the outbreak of war in 1914, his father took the family to London and joined the Ministry of War; they divided the post-war years between London and Ireland. Bacon repeatedly ran away from his school in Cheltenham (1924-6). After his authoritarian father, repelled by his burgeoning homosexuality, threw him out of the family home for wearing his mother’s clothes, Bacon arrived in London in 1926 with little schooling but with a weekly allowance of £3 from his mother.

In 1927 Bacon travelled to Berlin (frequenting the city’s homosexual night-clubs) and Paris. He was impressed by Picasso’s 1927 exhibition (Galerie Paul Rosenberg) and began to draw and paint while attending the free Academies. Returning to London in the following year, he established himself (and his childhood nanny Jessie Lightfoot) at Queensbury Mews West, South Kensington. He worked as a furniture and interior designer in the modernist style of Eileen Gray and exhibited his designs there in 1929. These were featured in the Studio1 before he shared a second studio show with the painters Jean Shepeard and Roy de Maistre (Nov. 1930). An early patron was the businessman, Eric Hall, who would became Bacon’s lover and supporter (c.1934- c.1950). As well as designing, Bacon continued to paint with de Maistre as an important influence and practical guide on matters of technique. The results showed the impact of Jean Lurçat and Picasso, and a Crucifixion shown at the Mayor Gallery in 1933 was juxtaposed with a Picasso in Herbert Read’s Art Now and bought by the collector Sir Michael Sadler. In the following year, the painter organised his first solo exhibition in the basement of a friend’s house (Sunderland House, Curzon Street) renamed ‘Transition Gallery’ for the purpose, but it was not well received and he responded by destroying the paintings. His works were rejected by Read for the International Surrealist Exhibition (1936), but Bacon and de Maistre helped Hall to organise Young British Painters (Agnew and Sons, Jan. 1937), which included Graham Sutherland, Victor Pasmore and others.

With the coming of war in 1939, Bacon was exempt from military service and released by the ARP on account of his asthma. He spent 1941 painting in Hampshire, before returning to London where he met Lucian Freud and was close to Sutherland. From these years emerged the works which he later considered as the beginning of his career, pre-eminently the partial bodies of Three Studies for Figures at the Base of a Crucifixion, 1944 (Tate Gallery N06171) which was first shown at the Lefevre Gallery (April 1945) to unease and acclaim alike. Bacon became central to an artistic milieu in post-war Soho, which included Lucian Freud, Michael Andrews, the photographer John Deakin, Henrietta Moraes, Isabel Rawsthorne and others. On Sutherland’s recommendation Erica Brausen secured the painter’s contract with the Hanover Gallery and sold Painting 1946 to the Museum of Modern Art, New York in 1948. Bacon gambled away the results at Monte Carlo and, as homosexuality remained illegal, his lifestyle in London and France was tinged with the illicit.

The early 1950s saw a period of success and rootlessness following the death of Jessie Lightfoot. Bacon’s first post-war solo exhibition included the first of many works inspired by Velazquez’s Portrait of Pope Innocent X, 1650 (Galleria Doria Pamphili, Rome) and showed his use of characteristic enclosing frameworks (Hanover Gallery, December 1951 – February 1952); it was followed by his New York debut (Durlacher Gallery, October 1953). The paintings of Popes, which established his reputation, alternated with those of contemporary figures in suits who were similarly entrapped; however, following a trip to Egypt and South Africa (1950) a lighter tonality emerged in paintings of sphinxes and of animals. During this period, Peter Lacey became Bacon’s lover and inspired homoerotic images of wrestlers derived from Eadweard Muybridge’s photographs in Animal Locomotion(Philadelphia 1887), Animals in Motion (London 1899) and The Human Figure in Motion (London 1901); the photographs became a habitual source, just as the theme of sexual encounter persisted. In Italy in 1954, Bacon avoided seeing Velazquez’s Pope Innocent X in Rome and his own paintings at the Venice Biennale, where he shared the British pavilion with Ben Nicholson and Freud. Two years later, he visited Lacey in Tangiers, and met the American writers William Burroughs and Paul Bowles, and the painter Ahmed Yacoubi; Bacon subsequently returned regularly until Lacey’s death in 1962.

The exhibition of paintings after Van Gogh (Hanover Gallery, 1957) marked the sudden departure from the preceding monochromatic works towards heightened colour. Despite their success, in the following year the painter transferred dealer to Marlborough Fine Art; they paid off his growing gambling debts, mounted larger exhibitions and ensured that he destroyed fewer canvases. In 1961, Bacon settled in Reece Mews, South Kensington, where he remained for the rest of his life, and in the following year the Tate Gallery organised a major touring retrospective which saw the resumption of his use of the triptych which would become his characteristic format. At that time he recorded the first of the interviews with the critic David Sylvester which would constitute the canonical text on his own work.

In 1963-4, Bacon’s international reputation was confirmed with his retrospective at the Solomon R. Guggenheim Museum, New York (1963) and by the publication of Ronald Alley’s catalogue raisonée. He refused the Carnegie Institute Award (1967) and donated the Rubens Prize towards the restorations following the flood of Florence. On the eve of Bacon’s large retrospective at the Grand Palais in Paris (1971), his long-time lover George Dyer committed suicide and this event left haunting echoes in ensuing paintings. However in 1974, John Edwards became the painter’s companion and model.

In the 1970s Bacon travelled regularly to New York and Paris, where he bought a pied-à-terre, and publications helped to establish the popular image of his work as a reflection of the anxiety of the modern condition. International exhibitions became more wide-ranging: Marseilles (1976), Mexico and Caracas (1977), Madrid and Barcelona (1978), Tokyo (1983). They reinforced the perception of Bacon as the greatest British painter since J.M.W. Turner. His works from this period were dominated by the triptych, but the figures grew calmer and were set against flat expanses of colour. In isolated images without a human presence, an animal power was retained in segments of dune and waste land. The exhibitions culminated in a second Tate retrospective (1985, travelling to Stuttgart and Berlin), and shows in Moscow (1988) – a sign of post-Communist liberalism – and Washington (1989). On a visit to Madrid in 1992, Bacon was hospitalised with pneumonia exacerbated by asthma and died on 28 April.