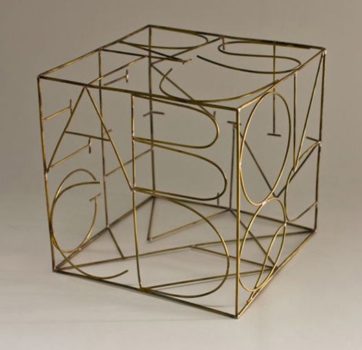 Fausto Melotti was born in Rovereto (Trento) on the 8th of June 1901. In 1918 he enrolled in the Faculty of Physics and Mathematics at the University of Pisa, a course of studies that he continued at the Politecnico in Milan, where he graduated in Electrotechnical Engineering in 1924. During this period he studied the piano and took up studies of sculpture in Turin under the sculptor Pietro Canonica. In 1928 he enrolled at the Accademia di Brera in Milan, where he was the pupil of Adolfo Wildt with Lucio Fontana, with whom he formed a long friendship. In 1932 he agreed to give a course in modern plastic arts at the Scuola artigianale in Cantù.
In 1935 Fausto Melotti’s cousin Carlo Belli published Kn, a text described by Kandinsky as being “the Gospel of abstract art”. It was the theoretical development of the experimentation undertaken by the abstract artists who, along with Belli and Melotti, met in the Bar Craya in Milan. That same year Melotti joined Abstraction-Création, the movement founded in Paris in 1931 by Van Doesburg, Seuphor, Vantogerloo with the aim of championing the work of non-figurative artists. Also in 1935, Melotti was among the Milanese artists who exhibited at the first group show of abstract art in the studio of Casorati and Paolucci in Turin, and held a solo show in the Galleria del Milione in Milan of sculpture of rigorously contrapuntal inspiration. Melotti encapsulated a sort of “musical abstraction” in the field of the figurative arts. His first exhibition brought him no critical or public success in Italy but received attention in France thanks to Léonce Rosenberg, and in Switzerland where, in 1937, he won the La Sarraz Prize. For the 6th Triennale of Milan in the same year he created a key work for the “Sala della Coerenza” designed by the B.B.P.R. studio (Banfi, Belgiojoso, Peressuti, Rogers), named the Constant Man. In this, twelve sculptures are set at regular intervals in a work in which colour, words and planes are harmonized in an environmental installation.
Between 1941 and 1943 he lived in Rome where he participated in the Figini and Pollini project for the Palazzo delle Forze Armate and, in the meantime, produced drawings, paintings and poems that were together published as Il Triste Minotauro by Giovanni Schweiller in 1944. He turned his attention to ceramics after the war and his refined technique and high quality won him the Grand Prix at the 1951 Triennale, and later gold medals in Prague and Munich. A strong professional and personal relationship was created in this period with Gio Ponti, with whom he worked on two large projects for the Villa Planchart in Caracas (1956) and the Villa Nemazee in Teheran (1960). In 1967 he exhibited a number of newly inspired sculptures at the Galleria Toninelli in Milan. This marked the start of a series of exhibitions in Italy and abroad that quickly brought him success and public awareness of his multifaceted art: sculptures, low reliefs, theatre sculptures, ceramics and works on paper.
In 1974 Adelphi published a series of his writings and poems under the title Linee that won the Diano Marina Prize in 1975. In 1979 a solo anthological exhibition was held at the Palazzo Reale in Milan and two years later, in Florence, an exhibition was staged at the Forte Belvedere. His work was subsequently shown in solo and group shows in New York, London, Zurich, Frankfurt and Paris.
Melotti died on 22nd of June 1986 and the same year the 42ndVenice Biennale commemorated him with the Golden Lion.