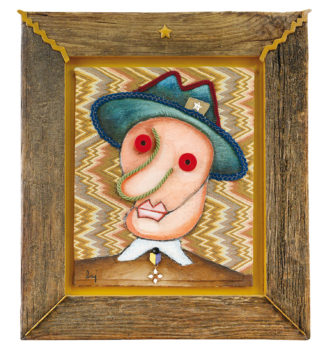 Acrylics and applications on cloth shown on panel within artist’s frame.

Heir to the surreal-dadaist spirit and experimenter of new techniques and stylistic solutions, Enrico Baj promotes the Nuclear Movement in 1951, together with Sergio Dangelo. In 1953 he met Asger Jorn with whom he founded the International Movement for Bauhaus Immaginista, siding against the forced rationalization and geometrization of art. Since the fifties he has been present on the international scene and, in particular, he exhibits regularly in Paris. He made his debut in the United States where he exhibited in 1960 and began working with Studio Marconi in 1967. In France André Breton invited him to exhibit with the surrealists and in 1963 he dedicated an essay published in the journal “L’0eil” by Rosamond and George Bernier. A genius artist in the use of the collage technique, which for him has literary origins, he uses it in the manner of Alfred Jarry, who “used to” draft his texts, introduce fragments of other writings, which were made to work in a different context from that for which they were written. ” In 1993 he began the cycle of “Tribal Masks”, images of a modern “primitivism” with which the opulent society wants to redo an instinctual and wild look by recycling, as symbols, the objects of daily consumption.